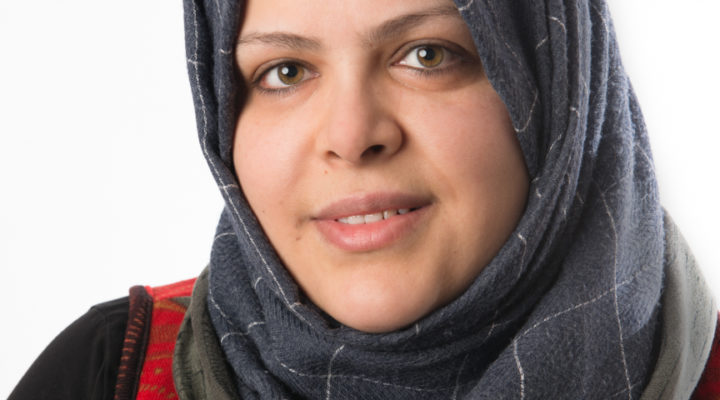 “Originally I am from Iraq. I have two sisters and a brother and I grew up in Bagdad.

I do not remember Iraq the way it is portrayed in the media. People would talk about the conflict in the country, the war between Iraq and Iran.  But, I grew up in a big house with a big garden, my father had a good job and we all had access to education. While growing up I have read books about my country and have learned more about what was happening which I was ignorant to. For example, I learned about the chemical attack which killed more than 5000 people including women and children in the North of Iraq. When all this happened I was at school having fun with my friends.

We weren’t allowed to talk about anything against the government in school. We had to support the President Saddam Hussein. There was a poem we would read in school and we would go every week to raise the flag to honour him. On a Thursday- we would wear army style clothes to pay respect to Saddam Hussein.

It was confusing as a child, for me, I was fourteen and of course, there were so many bad things happening but it was expected of us to support this man and this regime- so conflicted or not, I did. Of course then, we had little access to news other than mainstream media. There was no access to the internet, social media or even foreign news channels like there is today.

People would come and tell us horrors about the war but we never really believe them. It was so peaceful where we were and there was no way to prove otherwise.

My parents were scared to talk about the war and the government. They would act like everything was normal despite me hearing different things from my friends and neighbours. I heard  that those who did not fight were hung to death. But my parents would lie about it as they feared for all our life.  If I noticed someone was missing or died my parents would tell me that it was a heart attack but I would notice the family being scared.

When I was about 25; all my friends were having married and having children. My friends would all push me to get married. They would joke about me settling down, but I wanted to finish my Masters first. But soon after I met my husband through close family friends.

My father arranged to meet an old friend of his in Jordan. As a family we went along and my father’s friend brought his son along from the UK. My husband is his friend’s son!

My husband lived in the UK since 1993. He was 13 years old when he came to Dundee and started high school here- he has lived most of his life in Scotland. We got married in Leeds.  I wasn’t happy in Iraq at this time so I didn’t mind coming to Dundee. The education seemed much better here than it was in Iraq. I lived with my in laws in Broughty Ferry. The area is beautiful. But my in laws told me to not go out alone, or use the buses alone. My English wasn’t very good so I felt quite vulnerable too.I then gained a little confidence and started going for English Classes at Mitchell Street.

I had by first child in 2004- I was 27 years old. I was struggling after the baby to go to college to complete ESOL. I couldn’t afford childcare- so we stayed with my in-laws and they looked after the baby so I could attend my classes. They were really generous and hospitable to us but for a growing family, a small single bedroom was getting a bit cramped. Me and my husband saved some money and we bought our own house.

I have three children now. I was feeling low and depressed after I gave birth to my third child. My  midwife then told me about Dundee International Women’s Centre

So with two kids in a double buggy and the other on my hip I set off to look for the centre.

The first day I came I could not find the centre.  No one could give me directions. This was in 2008- not many people knew about the centre then. I had to go back the next day and  I met Dana at the door, and she could speak a little bit of Arabic- and I almost cried!

I was so happy to hear someone speaking my language. I had no friends here- my in-laws had moved to Arbroath- I was lonely and I was depressed so finding the centre was a big change for me. Everyone was so nice to me and my kids and I put them in the crèche so I could start English classes here.

I was then invited to try the childcare course; I decided to give it a go. At first, I found it really boring- I wondered if I was in the right place- I worried I would struggle to complete it. But, I was really good at it, I got good grades and great feedback. In 2014 I was offered a job in the crèche.

Sometimes I wish I had stayed in college or went back to University. I see my friends a lot on Facebook – I miss it. The lifestyle they have that I could have had.  Maybe if I was not married I would be like them- my friends, winning awards and having great careers.  But, I believe happiness comes in many different forms.  Some people get to find happiness in their families and some in their jobs. I have missed out on things but I cherish the things I have.

Now that I am qualified childcare practioner- I am looking for further opportunities- I am thinking about maybe being a teacher assistant.

I go back to Iraq every two years, but my family don’t come over here. They never have. There is a lot of paperwork to arrange their visas and that is expensive to do. The children love visiting Iraq. Summer all year round and our family is over there. But my husband’s job is in Scotland. He can’t go over without a job and house and things. And it is still not really safe.  I look forward to the next stage of my life and I will take things as it comes. Scotland have given me a lot and I am grateful to be here.”

Questions about childcare for your event? 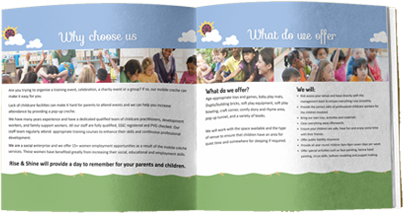 Why do parents rely on Rise & Shine?

Why provide childcare at your event? 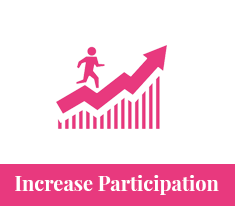 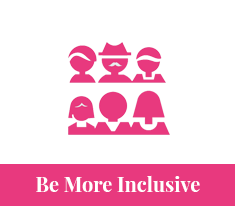 Parents can struggle to attend events, be more inclusive and offer a service that helps 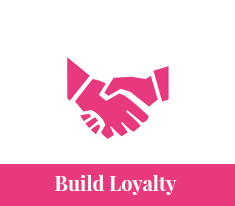 Mums, dads and now their kids will want to come back to your events again and again 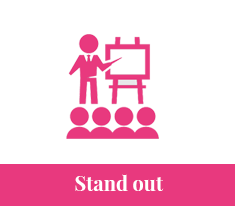 Wow your guests and stand out from other events by offering free childcare!

Find Out More
“Rise and Shine is such a great facility, our attendance at our conference was increased by offering this service”
Sense Scotland

Questions about childcare for your event?

We are a social enterprise

We offer over 15 women employment opportunities as a result of the mobile crèche services. These women have benefited greatly from increasing their social, educational and employment skill. Learn more